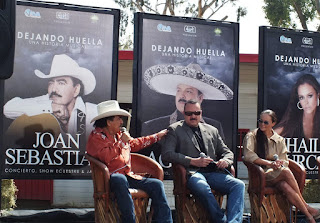 SHAILA DURCAL WILL OPEN IN MOST MARKETS, SILVESTRE DANGOND IN NYC

LOS ANGELES, CA - Two giants of Mexican music, the legendary Joan Sebastian and acclaimed Pepe Aguilar, announced that they        will tour in concert together in DEJANDO HUELLA... UNA HISTORIA MUSICAL, kicking          off June 22 in Washington D.C.


The show is produced by Viva Entertainment Network, the most diverse Latin entertainment company in the U.S, in conjunction with CMN            and Agave Promotions. Shaila Durcal, the spanish singer daughter of famous Rocio             Durcal, will open in most markets. Silvestre Dangond a  very popular colombian singer, will open in New York. Tickets are already on sale in selected markets.

DEJANDO HUELLA features Sebastian and Aguilar’s platinum selling, world class productions plus the legendary traditions of jaripeo* and equestrian performances. DEJANDO HUELLA will make its way to l5 major markets, including New York and Washington DC, where for the first time in 25 years a Latin music equestrian show will play arenas the size of the Izod Center and the Patriot Center. 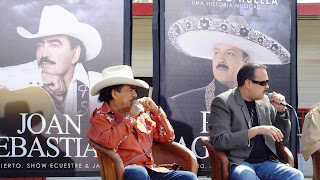 Aguilar and Sebastian are two    of the most respected and successful performers/songwriters playing some of the most exciting and important music in the world. Spanish-born Shaila Durcal is a rising superstar in the pop/ranchera world and Silvestre Dangond is Colombia’s top Vallenato, making DEJANDO HUELLA one of the most exciting touring packages in years.

It is a testament to the enduring importance and increasing popularity of Mexican music, and a fan’s musical dream come true. DEJANDO HUELLA... UNA HISTORIA MUSICAL will leave its mark in the sands of touring history.

The announcement about the tour to the media,  took place at Pico Rivera and was preceded by a performance      of jaripeo by the Lopez family who own the legendary venue, and have for three generations been leaders in the genre. 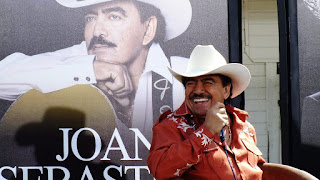 JOAN SEBASTIAN
Joan Sebastian is one of Mexico’s biggest music stars, a multi-Latin Grammy award winner and a top-grossing live performer, almost mythical in stature. But writing songs that touch the people he loves is still his greatest passion. Known as both “The People’s Poet” and “The King of Jaripeo,” the singer/songwriter has been writing and arranging songs since he was a teenager, and has racked up hits from the 1970s to the present. As a performer, he’s one of Mexico’s top-grossing acts, regularly selling out venues on both sides of the border. As a songwriter, his compositions have been covered by a pantheon of Mexican stars, including Alejandro Fernandez, Rocio Durcal, Luis Miguel, Vicente Fernández and more. As an artist, he’s been showered with awards, including multiple           gold and platinum records and the ASCAP Silver Pen award. 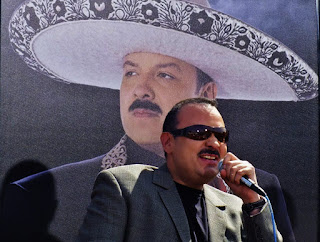 With more than 12 million records sold, 23 albums and 7 GRAMMYs ® under his belt, multi-platinum singer-songwriter Pepe Aguilar is an impressive master of fusion whose proven capacity to inspire audiences with his music and talent has no boundaries. Aside from his exceptional voice, Pepe Aguilar is a respected composer and producer who has worked with some of the big names in the Latin music world. The son of Mexican recording legends Antonio Aguilar and Flor Silvestre, Pepe was influenced and supported by his parents to start singing as a young boy, making his debut at the age of three when his parents handed him a microphone during a concert at Madison Square Garden in New York City. Last summer, Pepe Aguilar was selected to receive his star in the Hollywood Walk of Fame.


* Jaripeo is a form of bull riding practiced in Mexico that developed in the 16th century. The modern form in the charreada called Jineteo de Toro. It requires the rider to stay on the bull as long as possible, preferably until the bull tires and stops bucking. This differs from the sport of bull riding seen in the United States, where riders are scored on the quality of their ride for a limited time period, usually eight seconds.
About Viva Entertainment Network, Inc.:
Viva Entertainment Network has been producing a broad spectrum of events to serve the U.S. Hispanic Market since 2003. Viva currently delights audiences with a star-studded combination of major arena tours, theatrical productions, super bailes, rodeos and festivals. In addition, Viva specializes in promoting the greatest brands        in family entertainment to Latino audiences. Viva’s extensive network also includes: concert venues and nightclubs, as well as, a major digital and social platform to support electronic ticket sales and promotion. In all, Viva has become one of the most diverse Latin entertainment companies in the USA and the main stage for Latin talent to engage the U.S. Hispanic market.