FIRST LADY MICHELLE OBAMA DELIVERS THE MESSAGE AT DNC...MY DEVOTED HUSBAND IS "A MAN WE CAN TRUST" 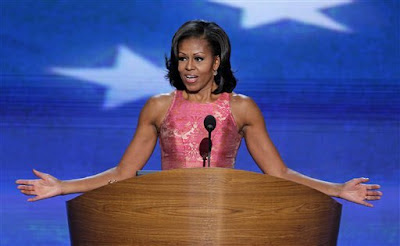 CHARLOTTE, N.C —  First lady Michelle Obama lovingly praised her husband Tuesday night in a prime-time Democratic Convention speech as a devoted husband and caring father at home and a “man we can trust” to revive the nation’s weak economy as president, beckoning the country to return him to the White House despite slow recovery from recession.

“He reminds me that we are playing a long game here ... and that change is hard, and change is slow and it never happens all at once,” First Lady Michelle Obama  told a nation impatient with slow economic progress and persistently high unemployment of 8.3 percent. “But eventually, we get there, we always do,” she said in a speech that roused Democrats packed into their convention arena and blended scenes from almost 20 years of marriage with the Obamas’ time in the White House.

Mrs. Obama, given a huge ovation and emotionally describing herself as the “mom in chief,” made no mention of Republican challenger Mitt Romney. But those who preceded her to the podium on the first night of the president’s convention were scathing.
“If Mitt was Santa Claus, he’d fire the reindeer and outsource the elves,” declared former Ohio Gov. Ted Strickland in one biting speech. 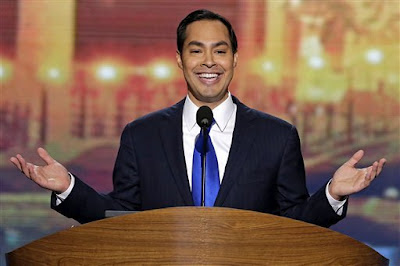 Tapped to deliver the keynote address, San Antonio Mayor Julian Castro said Romney was a millionaire politician who “quite simply, doesn’t get it” when it comes to the needs of the middle class. Referring to the Republican’s support for mandatory health insurance when he was governor of Massachusetts, he added, “Gov. Romney has undergone an extreme makeover, and it ain’t pretty.”

Polls made the race for the White House a tight one, almost certain to be decided in a string of eight or 10 battleground states where neither the president nor Romney holds a clear advantage. There was ample evidence during the day of an underperforming economy, including a report that said manufacturing activity declined for a third straight month and an announcement from the Treasury that the government’s debt exceeded $16 trillion at the close of the business day.

Delegates cheered as a parade of speakers extolled Obama’s support for abortion rights and gay marriage, for consumer protections enacted under his signature health care law and for the auto industry bailout he won from Congress in his first year in office.

“He said he’d take out bin Laden, and with our great SEAL team, he did,” declared former Virginia Gov. Tim Kaine in one of several references to the military raid that ended the life of the terrorist mastermind behind the attacks of Sept. 11, 2001.

There was also a tribute vídeo shown in honor of the late Senator Ted Kennedy, the third longest-serving member of the United States Senate in American history. Former President Clinton could not have said it better about Ted  Kennedy  "When people look back into this century, they will see that Ted Kennedy was one of the most productive, compassionate and effective man to have served in the United States Senate in its entire history..."


There was no end to the appeals for donations to Obama’s re-election campaign, falling further behind Romney in cash on hand with each passing month. “If you think Barack’s the right man for the job, please show your support with a donation of $5 or more today,” the first lady emailed supporters a little more than 90 minutes before her speech.

She walked out to the crowd’s cheers as the band played Stevie Wonder’s “Signed, Sealed, Delivered I’m Yours,” the song he sang onstage at Obama’s Denver convention four years ago. 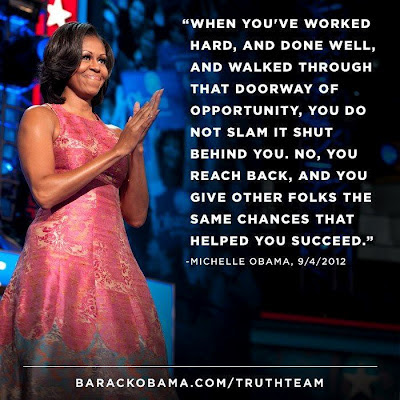 In particular, after listening to the First Lady speak at the opening night of the Democratic Convention, admiring the family values they´ve shown,  and watching them grow through the good, the bad, the difficult and the memorable moments in their lives as husband and wife, I have to agree that we need to give a vote of confidence to President Obama for four more years, we need him in the White House to complete the job he has started and has promised to get done!

We cannot tell a great mechanic to stop fixing our automobile, that we need to take us where we want to go, when he is about to finish the job....


And for both of them I want to dedicate this vídeo by danizzlesmama that brings to my  mind these wise words "Behind every great man, there is a great woman..."

The Oscar-nominated actor died on September 3 at the age of 54 from complications after a heart attack. 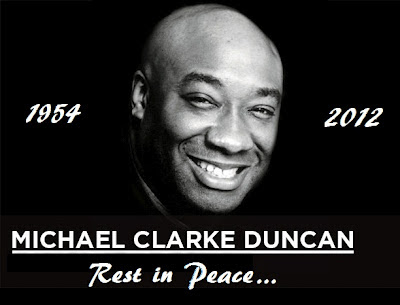 Michael Clarke Duncan died in Los Angeles on Monday, September 3. The Academy Award-nominated actor had a heart attack on July 13 and never fully recovered. Clarke died at a Los Angeles hospital where he had been since having the heart attack more than seven weeks ago.

Michael Clarke Duncan  was born on December 10, 1957, he was an American actor, best known for his breakout role as John Coffey in The Green Mile, for which he was nominated for an Academy Award and a Golden Globe.

Before he broke into acting, Duncan worked as a bodyguard for stars including Will Smith, Martin Lawrence, Jamie Foxx, LL Cool J, and The Notorious B.I.G whose 1997 death prompted him to quit that line of work.

At 6-feet, 5-inches tall and approximately 300 pounds, Duncan was nominated for an Academy Award and a Golden Globe for his role as gentle giant prisoner John Coffey in "The Green Mile," also starring Tom Hanks. Duncan won the role, in part, due to a recommendation by Bruce Willis, who he worked with on 1998's "Armageddon." Duncan went on to appear with Willis in three more films -- "Breakfast of Champions," "The Whole Nine Yards" and "Sin City."


Duncan's career spanned three decades and included roles in other television and film titles including "The Fresh Prince of Bel-Air," "Married with Children," "The Jamie Foxx Show," "Living Single," "Bulworth," "Arli$$," "A Night at the Roxbury," "Sister, Sister," "Planet of the Apes,"The Scorpion King (where he starred alongside his friend, The Rock),  "CSI: NY," "Talladega Nights," "Two and a Half Men," "Bones," and most recently "The Challenger," which is yet to be released.

Duncan was a prolific voice-over actor as well, lending his rumbling baritone to animated characters in "Kung Fu Panda," "King of the Hill," "Family Guy," "Green Lantern," and many others. The African American actor also played The Kingpin in 2003's "Daredevil," starring Ben Affleck and Jennifer Garner.


Like every other aspect of his life, the impression Michael Clarke Duncan made when he appeared in a film was always big. From his first major role as one of the roughnecks saving the world in "Armageddon," he rumbled seats with his deep baritone voice and earned laughs with his natural charm.

On July 13, 2012, Duncan was sent to the hospital after suffering from a heart attack. It was reported that his girlfriend, Omarosa Manigault-Stallworth, potentially saved his life by performing CPR before he was transported to the hospital.

Duncan's publicist Joy Fehily said in a statement on August 6, 2012 that he was moved from the intensive care unit but remained hospitalized following his July 13 heart attack.

On September 3, 2012, a publicist quoted Manigault as saying that Duncan had died during the morning hours in Los Angeles at the age of 54.

El NotiCoto ‏@ElNotiCoto
Rest in Peace Michael your heart stopped but your essence, your spirit, your work and great smile will live forever!


His co-star Mercedes Masohn tweeted: "Today is a sad day. Michael Clark Duncan passed away this morning. Known for his moving performance in The Green Mile. RIP MCD. You'll b missed."
Zachary Levi, actor
"Blessed to have had the opportunity to work with Michael Clarke Duncan while he was still with us. He was a kind soul that will be missed."
Roger Ebert, film critic
"Michael Clarke Duncan passes at 54. A striking screen presence."
MC Hammer, rapper
"One of the best among Men on earth. A gentle Giant. Loved him. Pure class and grace. RIP my friend."
Adam Baldwin, actor
"R.I.P. dear Michael. We were all honored & priviliged to know you & work with you on 'Chuck.' Farewell, gentle giant."
Terry Crews, actor
"Rest in Peace to my brother who paved the way for me and many Black actors, Michael Clarke Duncan."
Steve Harvey, actor and radio host
"I will miss my friend, Michael Clarke Duncan. What an incredible soldier in God's Plan."
Olivia Munn, actress
"Michael Clarke Duncan always had a smile on his face & a big bear hug ready for you. My thoughts & prayers are with his family&friends. RIP."
Jordin Sparks, singer and actress
"RIP Michael Clarke Duncan. Thank you for being so kind to me & for sharing your talent with the world. You will be truly missed."
Mario Lopez, TV host and actor
R.I.P Michael Clarke Duncan... One of the nicest & most professional guys I've had the pleasure of knowing. So sad."
David Boreanaz, actor
R.I.P. my friend MCD. I will miss you. 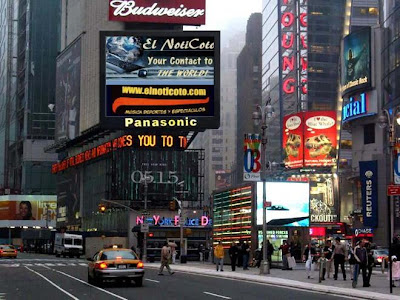 Aug. 30, 2012 — Additional Kansas man arrested on charges stemming from international child pornography probe
Robert Poe III, of Kansas City, Kan., was arrested and charged with three counts of traveling to entice a minor to engage in sexual activity. He is the latest suspect to be charged in an international child pornography probe that has resulted in numerous arrests worldwide. Full Story