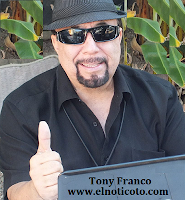 Por Tony Franco
Every once in a while, a concert of this magnitude hits our metropolitan area. Reventón Super Estrella 2012  is brought  to Los Angeles by local radio station Super Estrella 107.1 FM.
This is an ongoing event every year in Los Angeles, and it seems that every time it gets better and better with sold out audiences and great performers.
Many cities claim to be the Capital of Entertainment, but honestly here in Los Angeles we have so many great artists that come and go giving us a chance to enjoy their music, their talent and have a wonderful time with friends because every weekend there is something good going on!

Reventon Super Estrella is one of the best events to hit our city and it happens  once a year. This Friday, August 10, thousands of fans will enjoy the electric performance of many international stars that one of my favorite radio stations in Los Angeles, has put together 101.7 FM SUPER ESTRELLA.
At 6 pm Mexican singer-writer Julieta Venegas will be on stage, she …
Post a Comment
Read more

On this page you will find links to all the information you need about the Olympic Games London 2012. We will also publish our own articles written by our special correspondent for the games Carlos Adolfo Lopez.
Post a Comment
Read more

REMEMBERING THE LIFE AND LEGACY OF LEGENDARY
ACTRESS / ACTIVIST, LUPE ONTIVEROS (1942—2012)
Ontiveros left an indelible mark on Hollywood and the Latino Community