The 4th annual Hola Mexico Film Festival. HMFF will be held May 20th to May 30th at the famed Ricardo Montalban Theater in Hollywood, California.
More than 20 films will be screening during the whole week including the best films that have emerged from the halls of Mexico. People that love good action films, dramas, comedies and real stories that have changed our society, will have a chance to enjoy all of these great movies this year at the Hola Mexico Film Festival. In 2011, this Film Festival welcomed more than 11,000 attendees. This year organizers anticipate over 15,000 guests and film aficionados.

"We are proud to say ADIOS CLICHES and HOLA MEXICO. Our goal is to showcase the real Mexico and transmit our vision of what life in Mexico is on a day-to-day basis. Mexico is not what is seen on current television networks or select news reports. We invite you to say goodbye to all the clichés that surround us every day and say HOLA to Mexico through the eyes of our Film Festival", expressed Samuel Douek, Director of the Festival.
"This year we are excited to announce that we will be expanding our overall program. Our feature film presentation for 2012 is a reflection of today’s cinema in Mexico. DIAS DE GRACIA, our inaugural film, has been praised among film critics around the world due to its extraordinaire photography, superb acting, and outstanding direction. Other films that will be presented at our Festival are Mexico’s great box office success AQUI ENTRE NOS  and the long awaited CRISTIADA; FOR GREATER GLORY  with Andy Garcia and Eva Longoria", added Mr. Douek.

"For the first time we will showcase a Short Film Program and a children’s matinee program, HOLA NIÑOS for families and children of all ages to enjoy. We will also screen two sixty-minute feature films that will play back to back.
Mexican documentaries have created social conscience awareness. In 2011, we saw the reality of Mexico’s criminal justice system in PRESUNTO CULPABLE. This year, we invite you to experience a Mexican classroom, and beyond with the movie DE PANZAZO! directed by maestro Juan Carlos Rulfo. We invite you to gain insight and an in depth perspective of the world of smugglers with the film, FELIX: AUTOFICCIONES DE UN TRAFICANTE.
We expect more than fifteen hundred LAUSD students during the Festival week who will join us at no cost to them. In effort to promote community awareness and film education HOLA Mexico Film Festivalwill donate film screening tickets to over ten non-profit organizations to generate funds and promote their causes.
We are grateful to our sponsors who make 2012 Hola Mexico Film Festival possible.
See you at the movies!", finished the Director of the Festival,  Samuel Douek.

THE MONTALBAN THEATER AND ITS NEIGHBORS...
By Mayra Sánchez

Los Angeles, CA - Hola México Film Festival returns to the Montalban Theater, a landmark located in the heart of Hollywood. For seven days moviegoers will have the opportunity to screen some of Mexico’s finest films. They will also get the chance to hear directors, producers, and actors speak about their films.  While the festival offers a unique way to experience Mexican culture and its films, the surrounding area also has plenty to do.
The Mexican restaurant, Velvet Margarita located just a street behind the Montalban Theater on Cahuenga Boulevard takes you to the beaches of Mexico by offering their famous margarita served in fresh pineapple. The restaurant has on their menu, traditional Mexican cuisine and antojitos. Another one of a kind Latin restaurant, El Floridita, which offers exquisite Cuban plates, and is also known for their live Salsa music that is conveniently on Vine Street. 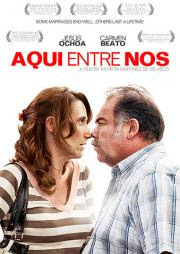 Many other restaurants and bars such as, Kabuki, Dillon’s Irish Pub, Big Wang’s, and Magnolia are within walking distance of the Montalban Theater. Whether you are in the mood to keep the fiesta going or a simply want to enjoy night out, Hollywood and Vine has an array of merchants at your disposition.
Also neighboring the Montalban Theater is Amoeba, the independent record store that is home to many albums waiting to be heard. Amoeba is not just another record store in Los Angeles; it is one of the largest. With it’s vast interior, Amoeba hosts live performances, free of charge. Amoeba also has a great selection of Latin Artists and music available for listening.
The Montalban Theater is just around the corner from the Metro redlines Hollywood and Vine exit. This friendly public transit is yet another way to make this years Festival more accessible and enjoyable.
CLICK HERE FOR MORE INFORMATION AND FESTIVAL SCHEDULE
- May 15, 2012 No comments: