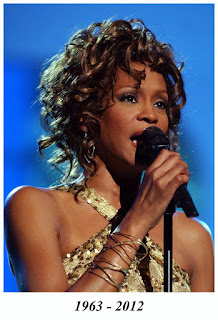 Whitney Elizabeth Houston (August 9, 1963 – February 11, 2012) was an American singer, actress, producer, and model. Houston was the most awarded female act of all time, according to Guinness World Records,[ and her list of awards include 2 Emmy Awards, 6 Grammy Awards, 30 Billboard Music Awards, 22 American Music Awards, among a total of 415 career awards as of 2010. Houston was also one of the world's best-selling music artists, having sold over 170 million albums and singles worldwide.


In May 2003, Houston placed at number three on VH1's list of "50 Greatest Women of the Video Era", behind Madonna and Janet Jackson. She was also ranked at number 116 on their list of the "200 Greatest Pop Culture Icons of All Time". In 2008, Billboard magazine released a list of the Hot 100 All-Time Top Artists to celebrate the US singles chart's 50th anniversary, ranking Houston at number nine.

Similarly, she was ranked as one of the "Top 100 Greatest Artists of All Time" by VH1 in September 2010.
In November 2010, Billboard released its "Top 50 R&B/Hip-Hop Artists of the Past 25 Years" list and ranked Houston at number three whom not only went on to earn eight number one singles on the R&B/Hip-Hop Songs chart, but also landed five number ones on R&B/Hip-Hop Albums

Inspired by several prominent soul singers in her family, including mother Cissy Houston and cousins Dionne Warwick and the late Dee Dee Warwick, as well as her godmother, Aretha Franklin, Houston began singing with New Jersey church's junior gospel choir at age 11. After she began performing alongside her mother in night clubs in the New York City area, she was discovered by Arista Records label head Clive Davis. As of 2011, Houston has released seven studio albums and three movie soundtrack albums, all of which have diamond, multi-platinum, platinum, or gold certification.

Houston was commonly known as"The Voice", in reference to her exceptional vocal talent.
According to  The New York Times ,"Houston's vocal style has had a significant impact on the music industry" and had "revitalized the tradition of gospel-soul-pop."
The magazine  Rolling Stone , in his biography, said Houston "defined the image of a female soul icon."

At age eleven, she began singing  in the Child Gospel Choir at "New Hope" Baptist Church in Newark, New Jersey. Later she accompanied her mother to concerts.  After appearing on the 1978 album of her mother,  Think It Over , she began to do background voices to  big name artists such as Chaka Khan, Jermaine Jackson, and Lou Rawls.
At age 16, he was offered to be the lead voice in the single from the band of  Michael Zager, "Life's a Party" in 1978 .
In the early eighties, she began appearing as a model in several magazines including Seventeen, Glamour and Cosmopolitan (even in some covers). In 1982, she made ​​her first recording as a singer with the whole Jazz-Funk  material in the song titled "Memories" and was included on the group's album  One Down . 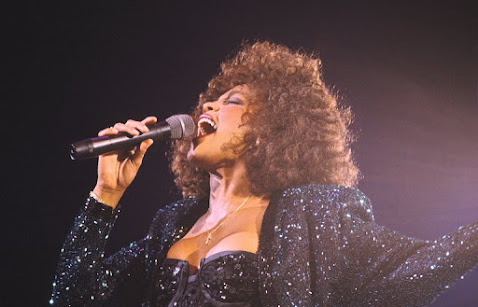 Houston signed a recording contract with  Arista Records  in 1983, shortly after the company's founder, Clive Davis , listened to her performance at the New York club Mikell's with her ​​mother.  Immediately the process of making her  first album was launched . In 1984, she had her first commercial success with "Hold Me" , a duet with  Teddy Pendergrass  (which was included in the album of the singer, Love Language  and then on their first album). The single, reached # 50 on the pop charts in the U.S. and the top 5 in the charts of R & B.

Houston is the only artist to chart seven consecutive No. 1 Billboard Hot 100 hits ("Saving All My Love for You", "How Will I Know", "Greatest Love of All", "I Wanna Dance with Somebody (Who Loves Me)", "Didn't We Almost Have It All", "So Emotional", and "Where Do Broken Hearts Go"). Houston is the second artist behind Elton John and the only female artist to have two number-one Top Billboard 200Album awards (formerly "Top Pop Album") on the Billboard magazine year-end charts. Houston's 1985 debut album.


Whitney Houston, became the best-selling debut album by a female act at the time of its release. The album was also named Rolling Stone's best album of 1986, and was ranked at number 254 on Rolling Stone's list of the 500 Greatest Albums of All Time. Her second studio album, Whitney(1987), became the first album by a female artist to debut at number one on the Billboard 200 albums chart.[7] Houston's crossover appeal on the popular music charts as well as her prominence on MTV, starting with her video for "How Will I Know", influenced several African-American female artists to follow in her footsteps.

This is our tribute to Whitney Houston, sharing this video and dedicating thoughts to a great singer that will be missed and remembered forever!
Houston's first acting role was as the star of the feature film The Bodyguard (1992). The movie's original soundtrack won the 1994 Grammy Award for Album of the Year. Its lead single, "I Will Always Love You", became the best-selling single by a female artist in music history. With this album, Houston became the first act (solo or group, male or female) to sell more than a million copies of an album within a single week period.[7] The album also makes her the only female act in the top 10 list of the best-selling albums of all time, at number four. Houston continued to star in movies and contribute to their adjoining soundtracks, including the films Waiting to Exhale (1995) and The Preacher's Wife (1996). The Preacher's Wife soundtrack would go on to become the best-selling gospel album in history. Three years after the release of her fourth studio album, My Love Is Your Love (1998), she renewed her recording contract with Arista Records. She released her fifth studio album, Just Whitney, in 2002, and the Christmas-themed One Wish: The Holiday Album in 2003. Amid widespread media coverage of personal and professional turmoil, Houston ended her 14-year marriage to singer Bobby Brown in 2006. In 2009, Houston released her seventh studio album, I Look to You.

DEATH OF A STAR

Houston was found dead in her guest room at the Beverly Hilton Hotel, in Beverly Hills, California, the night before the Grammys, which she planned to attend. Toxicology reports showed that she had accidentally drowned in the bathtub due to the effects of chronic cocaine use and heart disease.

On February 11, 2012 she got off the Train of Life where one day we will all follow her footsteps....She shared her music, her voice, her triumphs and battles in life...What will your legacy be to the world as you get off the train of life someday?

On August 17, 2012, Sparkle her last acting film was released 6 months after her death.

Sparkle is a 2012 American musical film directed by Salim Akil and produced by Stage 6 Films, It was released on August 17, 2012 by TriStar Pictures. Inspired by The Supremes, Sparkle is a remake of the 1976 film of the same name, which centered on three singing teenage sisters from Harlem who form a girl group in the late 1950s. The remake takes place in Detroit, Michigan in the 1960s during the Motown era. 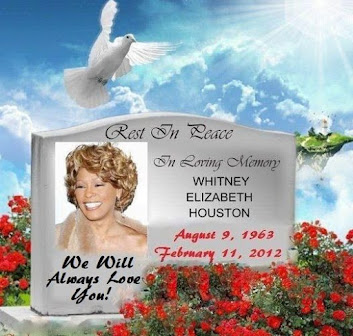