THE ORIGINAL CINCO DE MAYO On Olvera Street/ N. Main St. Stage This Saturday May 5 From Noon to 9:00 p.m.


The Original CINCO DE MAYO In a unique observance of Mexican history in the USA, La Union de Poblanos en el Exterior (UPEXT), who has been the organization in charge for the past 10 consecutive years of organizing this festivity. This year UPEXT will received a special recognition from the City of Los Angeles for their work efforts with the immigrant community.


On this occasion joining in partnership with The Center for the Study of Latino Health and Culture, UCLA, David Geffen, School of Medicine, will present and host a traditional, cultural and artistic event celebrating the 150th year of a tradition in a very authentic way: Original CINCO DE MAYO.


A celebration showcasing the actual real version of this Mexican tradition uniting Mexican immigrants, Chicanos, and Latinos alike in a feeling of honor and respect for accurate history and culture. The even includes music, food and family entertainment, featuring as the main event, the well know Mexican Rock Star Alex Lora, who will perform in the evening, along many other musical groups who will start performing at noon. 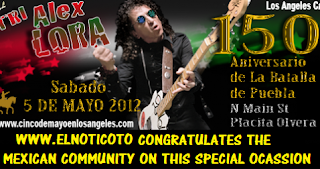 The program also includes a reenactment of the Battle of Puebla, establishing a tradition for many years to come to maintain important cultural roots alive in the most accurate portrayal of a crucial event in history.


Mexican Cinco de Mayo celebrates the heroic victory of Mexico against the French army, an event which took place in 1862 and is remembered as “The Glorious Battle of Puebla” or “La Gloriosa Batalla de Puebla.” The local recreation of this traditional celebration will provide the opportunity for families to gather and enjoy a day of Mexican folklore and observe regional values. It will create a friendly environment that brings back for a day the scent, music, and the dance and flavors that Mexicans cherish.


The exhibition explores the experience of Latinos in the newly created state of California following its annexation. After the U.S. victory in the Mexican-American War, the debate roiled over slavery in the newly acquired Mexican territories as well as the French assault on the state of Juarez, Mexico. Inspired by the book by Dr. David Hayes-Bautista, Cinco de Mayo an American Tradition, from the University of California Press, the exhibition examines the previously little known connection between the historical events of the time and the uniquely American holiday of Cinco de Mayo.


According to the text, with the initial, improbable victory of Benito Juarez's forces, led by General Zaragoza, at Puebla on May 5, 1862, Latinos in California found cause to celebrate the possibility of a reversal of the threats gathering around them. Spontaneous political organizations, or “juntas patrioticas” (“patriotic gatherings”), mobilized to support Juarez' government with financial donations, covert arms shipments and even volunteers. They supported the Union, forming militias to fight against the Confederacy in the territories and organized politically to support Lincoln's re-election. They celebrated the eventual Union victory, mourned the death of Lincoln and erupted in jubilant celebration at the withdrawal of French troops in Mexico.


As new waves of immigration from Latin America came to California, the holiday was re-shaped, gradually losing its initial connection with historical events. Its origin in the simultaneous threats posed by the Civil War and French invasion of Mexico had meaning for Latinos negotiating a new country and culture that often marginalized them, and it continues to resonate through contemporary debates about immigration, language and power. 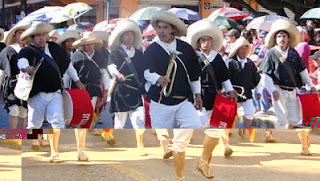 
Unión de Poblanos en el Exterior (UPEXT) is a Los Angeles based organization dedicated to the promotion and advancement of the people and culture of Puebla, Mexico. With events such as the 5th Annual Feria de los Moles to be hosted October  7, 2012 at Olvera Street (Mole Fair) www.feriadelosmoles.com  , UPEXT fosters appreciation for the unique contributions of Puebla abroad, and preserves the cultural richness provided by a successful group for community leaders from the State of Puebla, Mexico to the rest of the world.

In 2011, The City of Los Angeles and Councilmember José Huizar, presented the organization “Unión de Poblanos en el Exterior en Los Angeles” (Los Angeles Union of Puebla In The Exterior- UPEXT) with a Proclamation in recognition of their efforts to foster cultural appreciation for the Mexican community abroad at the Van Nuys, California Civic Center, a recognition arriving just in time for the last year’s Cinco de Mayo celebration.