Hector "Macho" Camacho, a Puerto Rican boxer known for skill and flamboyance in the ring as well as for a messy personal life and run-ins with the police, was declared dead on Saturday, four days after being shot in the face. He was 50.


Former featherweight champion Juan Laporte, a friend since childhood, described Camacho as "like a little brother who was always getting into trouble,"

"He was a good human being, a good hearted person," Laporte said as he waited with other friends and members of the boxer's family outside the hospital in San Juan after the shooting. "A lot of people think of him as a cocky person but that was his motto ... inside he was just a kid looking for something."

Shot while sitting in a parked car outside a bar Tuesday with a friend in the city of Bayamon, he was declared dead at the Centro Medico trauma center in San Juan. The friend, 49-year-old Adrian Mojica Moreno, died at the scene of the shooting. Police said Mojica had nine small bags of cocaine in his pocket and a 10th bag was found open in the car.

Originally from Bayamon, just outside San Juan, Camacho was long regarded as a flashy if volatile talent, a skilled boxer who was perhaps overshadowed by his longtime foil, Mexican superstar Julio Cesar Chavez, who would beat him in a long-awaited showdown in Las Vegas in 1992.

Camacho fought professionally for three decades, from his humble debut against David Brown at New York's Felt Forum in 1980 to an equally forgettable swansong against Sal Duran in Kissimmee, Florida, in 2010.

In between, he fought some of the biggest stars spanning two eras, including Sugar Ray Leonard, Felix Trinidad, Oscar De La Hoya and Roberto Duran.
"This is something I've done all my life, you know?" Camacho told The Associated Press after a workout in 2010. "A couple years back, when I was doing it, I was still enjoying it. The competition, to see myself perform. I know I'm at the age that some people can't do this no more."


He divided his time between Puerto Rico and Florida in recent years, appearing on Spanish-language television as well as on a reality show called "Es Macho Time!" on YouTube.

Inside the boxing ring, Camacho flourished. He won three Golden Gloves titles as an amateur, and after turning pro, he quickly became a contender with an all-action style reminiscent of other Puerto Rican fighters.

Long promoted by Don King, Camacho won his first world title by beating Rafael Limon in a super-featherweight bout in Puerto Rico on Aug. 7, 1983. He moved up in weight two years later to capture a lightweight title by defeating Jose Luis Ramirez, and successfully defended the belt against fellow countryman Edwin Rosario.

The Rosario fight, in which the victorious Camacho still took a savage beating, persuaded him to scale back his ultra-aggressive style in favor of a more cerebral, defensive approach. The change in style was a big reason that Camacho, at the time 38-0, lost a close split decision to Greg Haugen at Caesar's Palace in Las Vegas in 1991.

Camacho won the rematch to set up his signature fight against Chavez, this time at the Thomas & Mack Center in Las Vegas. Camacho was roundly criticized for his lack of action, and the Mexican champion won a lopsided unanimous decision to retain the lightweight title.
It was at that point that Camacho became the name opponent for other rising contenders, rather than the headliner fighting for his own glory. 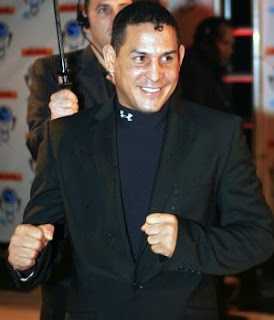 He lost a unanimous decision to another young Puerto Rican fighter, Trinidad, and was soundly defeated by De La Hoya. In 1997, Camacho ended Leonard's final comeback with a fifth-round knockout. It was Camacho's last big victory even though he boxed for another decade.

"Hector was a fighter who brought a lot of excitement to boxing," said Ed Brophy, executive director of International the Boxing Hall of Fame. "He was a good champion. Roberto Duran is kind of in a class of his own, but Hector surely was an exciting fighter that gave his all to the sport."

The fighter's last title bout came in 1997 against welterweight champion Oscar De La Hoya, who won by unanimous decision. Camacho's last fight was his defeat by Duran in May 2010. He had a career record of 79-6-3 (Source AP).