AT THE MOVIES THIS WEEKEND! ENJOY THESE NEW FILMS AND HAVE FUN WITH YOUR FRIENDS

These are the new movies from Hollywood for this weekend
It´s summer and vacation time for many of you to go out and enjoy movies more often, since there is no worry about getting up early the next day to go to school.
Call your friends and plan an afternoon or night at the movies and have fun together with so many new fims coming out in the following weeks.

2 hours and 6 minutes   -   Action | Adventure | Fantasy
Lured to a Japan he hasn't seen since World War II, century-old mutant Wolverine (Hugh Jackman) finds himself in a shadowy realm of yakuza and samurai. Wolverine is pushed to his physical and emotional brink when he is forced to go on the run with a powerful industrialist's daughter (Tao Okamoto) and is confronted -- for the first time -- with the prospect of death. As he struggles to rediscover the hero within himself, he must grapple with powerful foes and the ghosts of his own haunted past.
Director: James Mangold
Stars:  Hugh Jackman, Rila Fukushima, Will Yun Lee, Tao Okamoto,  Famke Janssen y Brian Tee

1 hour and 44 minutes - Comedy | Romance
It's 1993, and high-school valedictorian Brandy Klark (Aubrey Plaza) decides she needs to shed her uptight image before college. She puts together a list of all the activities -- including sex -- she missed in high school. When she soon realizes she is out of her depth, Brandy enlists the aid of her friends, older sister, and boss. Summer marches on, and members of the group realize that they will need plenty of imagination and open mindedness to complete her project before September.
Director: Maggie Carey
Stars: Aubrey Plaza, Johnny Simmons, Bill Hader y Alia Shawkat

1 hour and  45 minutes – Action/Adventure
Manufacturing just fifty grams of meth in China will earn you a death sentence, and Timmy Choi (Louis Koo) has manufactured tons of it. After a violent lab accident, he's in the custody of Captain Zhang (Sun Honglei), and now he has only one chance to avoid execution: turn informant and help Zhang’s undercover team take down the powerful cartel he’s been cooking for. But as the uneasy allies are forced to compress months of police work into just 72 sleepless hours, the increasingly desperate police are quickly stretched past their limits. As things spin wildly out of control, the line between duty and recklessness is blurred, and it becomes unclear whether the cop or the criminal truly has the upper hand.
Director: Johnny To
Stars: Sun Hong-Lei, Louis Koo, Crystal Huang, Michelle Ye y Huang Yi

1 hour and 24 minutes – Terror/Action/Adventure
In the waning days of World War II, a battalion of Russian soldiers find themselves lost in enemy territory. Stumbling upon a village decimated by an unseen terror, they discover that a mad scientist (Hellboy's Karel Roden) conducts experiments to fuse flesh and steel, creating an unstoppable army of undead soldiers. Leaderless and faced with dissention amongst their dwindling ranks, they must find the courage to face down an altogether new menace - or die trying.
Director: Richard Raaphorst
Stars: Karel Roden, Joshua Sasse, Robert Gwilym y Alexander Mercury

DESCUBRE NUESTRA BELLEZA DEL MES PULSA AQUÍ EN ESTA FOTO
CLICK ON THIS PICTURE  TO KNOW MORE ABOUT OUR BEAUTY OF THE MONTH
- July 27, 2013 No comments:

MURALS UNDER THE STARS STARTS THIS SATURDAY 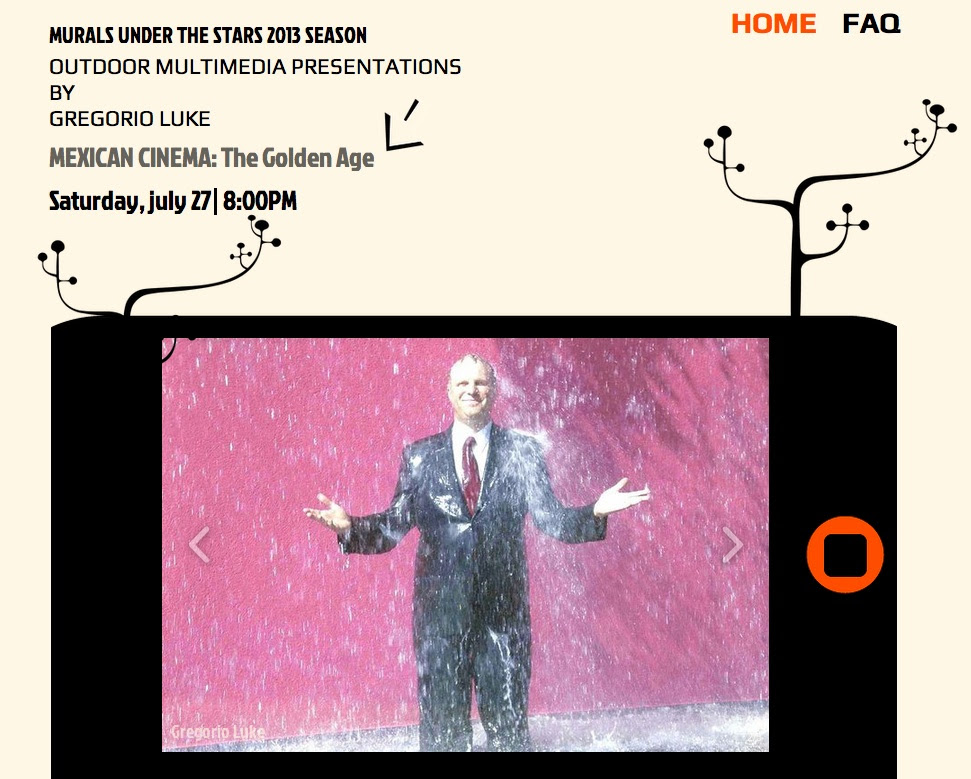 Join us for the 12th Season of one of the most exciting outdoor artistic experiences in Southern California, Murals Under the Stars! Gregorio Luke returns this summer with a series introducing a new lecture, Mexican Cinema. It will include scenes with superstars like Maria Felix, Pedro Infante, Cantinflas and the art they inspired. Also this season, the return of two giants of art, the murals and lives of Diego Rivera and David Alfaro Siqueiros! All images are projected life-size on a 1,800 square foot wall!

Our mercado (market) opens for shopping and dining at 6:30pm.
For more information or to purchase tickets, call 562.437.1689
or online at www.molaa.org

ABOUT GREGORIO LUKE
Gregorio Luke is an expert in Mexican and latin  American art and culture.
He has  given over  mil lectures in México, United States, Europa , China and South America in institutions such as Library of Congress, The Smithsonian Institution, The san Francisco Museum of Art, the Detroit Institute of Art , and universities such as Harvard, Columbia, Georgentown and UNAM , amon others.

He is  the former Director   of the Museum  of Latin American Art in Long Beach, the cónsul  of cultural affairs of México en Los  Angeles an the first Secretary of Embassy of México  in Washington D.C. .He is the founder and president of ARCOS (Art in Communities an schools) a non-profit organization whosw misión is to bring arts to families living  in low. Income  communities.

Among the awards  he has are received are the Irving Leonard Award  by The Hispanic Society  of Library  of Congress (1995); the Angel award by the bilingual foundation of the arts (2006) and the local Heroes award b¡y KCET (2008) His publications include “Beyond  borders: Discovery and Collaboration” 1997, “Soto art and Science” 2006 and “ Latin America the tradition of inclusiveness 2007.