SHAKIRA GAVE BIRTH TO HER FIRST SON IN SPAIN

Shakira became a happy mother this past Tuesday after givig birth to her firstborn Milan, who weighed 6 pounds, 6 ounces. Earlier, Shakira had asked his fans prayers for her and her baby in this special day.
Through a tweet, "Pies Descalzos" (Barefoot) Foundation, created by Shakira said: "Our Children and the team are happy for the birth of Milan! We love you Shaki ".
Milan, the name chosen by the couple, means beloved, full of grace and love in Slavonic, in ancient Roman, enthusiastic and hard-working, and in Sanskrit, unification.
Piqué, the popular Spanish player and proud father wrote "He will be Barcelona´s new partner  as of this moment. " 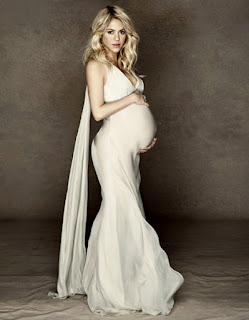 The popular and beloved Colombian singer and her partner, Gerard Piqué, arrived around 6:30 pm to the Barcelona Teknon clinic in Spain, aboard an Audi car with tinted windows driven by a brother of the singer who gave birth to a healthy baby 3 hours later around  9:36 pm.
The birth of her first baby was by cesarean section, and the Colombian singer was attended by Dr. Garcia Valdecasas, who has also  helped in the delivery of other personalities children, including Princess  Cristina of Spain.
After training with his club Barcelona, Piqué this past Tuesday morning went to his home in the town of Cabrils, 25 kilometers from Barcelona, ​​to pick up Shakira and bring her to the clinic.
Numerous media stood guard at the doors of the clinic, after the released news that  Tuesday was the day chosen for the birth of thecouple´s  first child.
The famous singer from Barranquilla, Colombia and the soccer player of one of Spain´s most popular club Barcelona, were very excited  about their first son´s birth.
Shakira´s parents and siblings were also in Barcelona to share  this special moment.
In June 2012, the couple released the news that Shakira was pregnant after two years in the relationship.
On behalf of all the staff of EL NOTICOTO MAGAZINE, we would like to extend our congratulations to Shakira and Piqué on the birth of their firstborn Milan.

This ultrasound picture was shared by the couple some time ago.
- January 24, 2013 No comments: